The Death of A Brave Chick 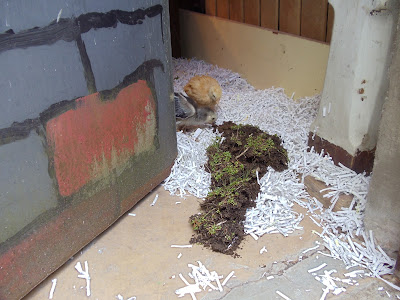 Well things started out pretty well this weekend.  Saturday afternoon after returning from work at the farm the sun was shining, it was warm and Springlike, and it seemed a good time to air out the basement storage room and start the chicks on getting a little fresh air.  As with every other move the chicks were slow to warm to my new idea so I started a program to encourage them to check out the out of doors.  I dug up a shovel full of chick weed and placed it the open doorway and waited. 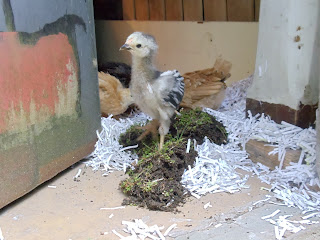 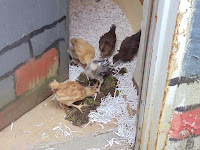 It didn't take too long until a few brave chicks came to the door to check out the yummy food and I waited and watched with my camera.  Things were looking good but none of the chicks was willing to venture past the doorway and out onto the patio area.  We were expecting dinner guests so I closed up the doorway and went upstairs to cook. 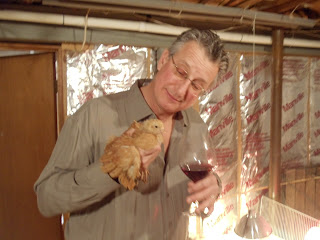 Our guests that evening were treated/compelled to come downstairs and see the chicks. 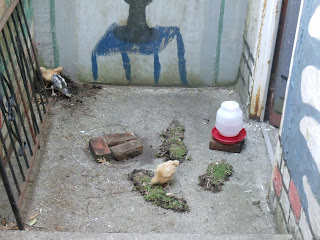 The next morning was again sunny so I opened the door, added a few shovels of chickweed and set up a water fountain outside.  And on day two the chicks started to come outside.  But just a brave few.  The rest of my "chicken" chickens were apparently smarter than I was and knew there was great risk in leaving the box and the indoors.  Things were fine for a while.  There had been a pile of bricks in the far corner that I put under the water fountain to keep the chicks from stepping in it.  The girls were thrilled with the pile of bugs that had been unearthed from their dark home and a party ensued in the far corner.

More friends came over to visit and we stood above the birds, watching them play.  Then I walked them out to their car and that's when I lapsed in my responsibilities.  I left them alone, forgetting that my dogs, Thelma and Louise, were outside and had been enjoying watching the birds out there as well.  I was only gone about 10 minutes or so but that was too much.  I came back to find Thelma out on the lawn with a baby chick in her mouth.  I let out what was, even to my own ears, a blood curdling yell, something that came from way deep inside that I had never heard before, and ran to Thelma.  She of course dropped her but it was too late.  The baby chick was still alive, but barely.  I ran and put Thelma in the house and by the time I returned the chick was dead. 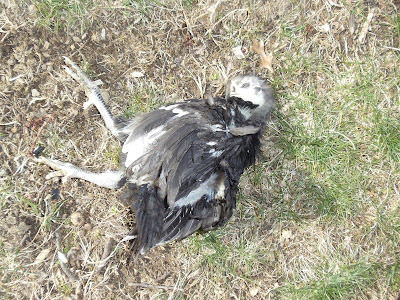 I dug a small grave in the back, in the same place where we buried one of our dogs that had died years ago.  I threw in a bit of chickweed and covered the grave with a large rock so neither the dogs or other backyard predators can dig her up.  I am so sorry.  I ordered extra chicks when I started, knowing that some might die in the raising up process.  The fact that they all made it after one month was pretty remarkable.  In fact she made it exactly 4 weeks.  I never thought it would be because of my inattention or carelessness that I would lose one.  I am just so sad about it.  I didn't sleep very well last night and as I write this I am weeping.
Posted by Donna's Chickens at 9:45 AM