I am just loving this chicken adventure

Last thursday was the final coop building day.  We installed the roosting bars and took care of the punch list...hardware installation, final adjustments to the chicken ramp, building a fenced yard for the chicks to play in using an old tennis court wind screen and some extra garden stakes, and setting up extension cords for the lights.  Charley and Larry volunteered to drive to Agway in Hickville and pick up a bale of straw for bedding and then we were good to go.

While they went to the store I got the bbq going...finally a nice warm day to sit and eat outside and enjoy the prospects of Spring.  Like most of our lunches this one was late, close to 3:00 and normal quitting time.  Everyone eats bagels all morning anyway and because rarely does any real work get done after lunch  I usually put it off as long as I can anyway.  But today we were running really late.  Fortunately I had saved the best task for after lunch so everyone hung in there.  After lunch and a desert of Hagen Daz pops it was finally time to move the chicks to their new home.

We all descended the basement steps, took the netting off the top of the play yard and everyone jumped in and grabbed a chick.  It was chaotic but there were so many of them is was relatively easy to catch one as they were all getting in each others way of escape.  One by one we started the parade of walking them to the coop.  There was 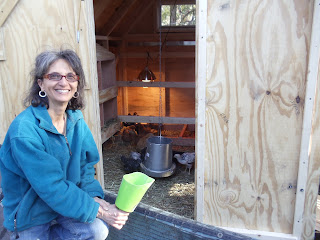 As the number of chicks left in the basement decreased they became harder to catch.  We switched to me being the catcher and handing the birds to each of the guys in turn to walk them out to the coop.  32 trips later they were all happily installed in their new home.  Here's me, the proud mother hen with her babies. 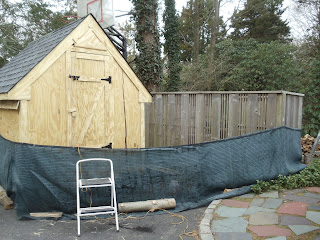 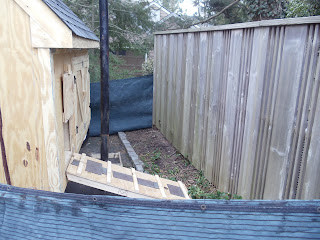 The coop was surrounded by the temporary fence and the chicks had a lovely yard to play in safely.   In the rain, which we had lots of this last week, they could be outdoors under the coop.  They could duck through the holes in the fence to wander in the larger yard, or stay in the small area surrounding the coop. 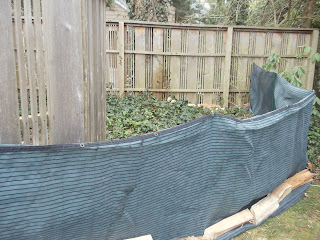 It was now time to open the door and let them out into the yard... 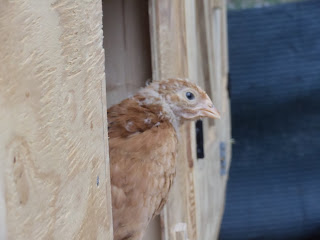 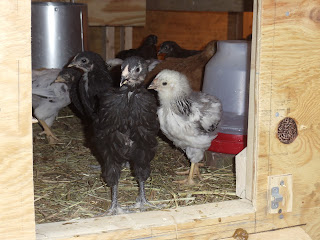 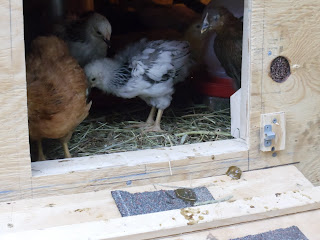 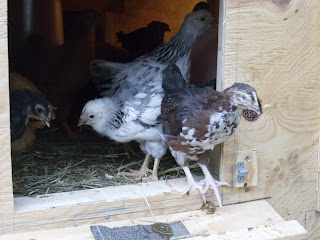 Now come the adventures in learning to use the ramp.  When I opened the door everyone rushed to look out.  But when the first chicks reached the top of the ramp and put a foot onto its new and rather slippery surface they immediately changed their minds and turned around to go back.  Unfortunately, they turned to face a solid wall of chicks all wanting to get a look at what was going on.  Now chicks were going in all directions except down the ramp.  You've all heard the expression scared shitless...well as each bird got to the edge of the ramp its bowels began to give way.  And as they began to slip and slide in the mess the ramp got even more slippery.  I took a utility knife and quickly cut some leftover roofing shingles into non-skid treads. That helped.  Slowly, things got calmer and more chicks ventured out onto the ramp.  I only wish I had a video to capture this truly comical scene. 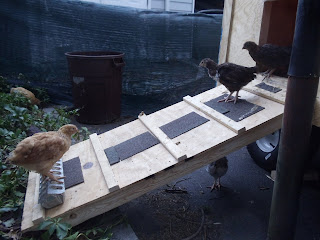 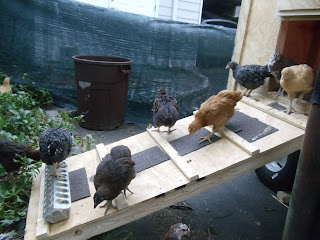 An hour later they were pros...
Posted by Donna's Chickens at 7:33 PM