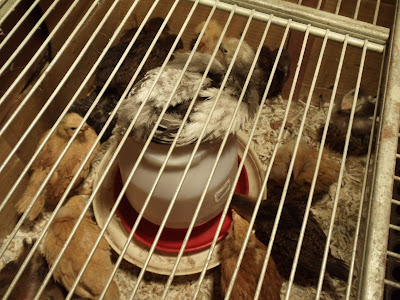 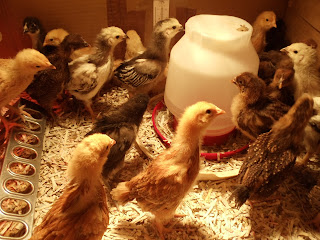 For the last few days I have been watching the chicks get bigger and realizing that they definitely need larger quarters.  Things are getting pretty crowded in the box...and the box is starting to sag in critical places that may need remedying soon whether I am ready or not.  So yesterday I began readying a space for the chicks, something like a large playpen adjoining the box.  It is adjacent to the door exiting the basement storeroom to the outside.  If the weather ever warms up it will allow the chicks to go out and get some fresh air...and for me to air out the  store room.  It needed to be covered with netting so the birds cant fly out of it .  I didn't want to put too much effort into it because I envision it as very temporary.  If the permanent coop could be finished next week and the weather warms up I want to move them there.  Failing that I would like to move them to the bicycle shed adjacent to the garage.  From there it would be easiest to set up some fencing and give them a chance to get out outdoors and forage in the garden beds.  Steve is starting to balk at the mess in the basement and worry about the healthiness of all this so I am trying to get them outside asap.  But for now it is still cold.


It looks pretty ragged but it has what they need and should last for the week or so that I need it to. 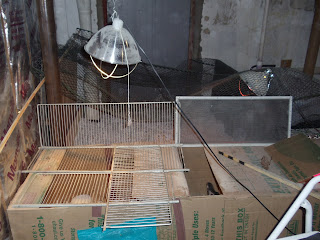 I have also been stalling because I was not sure once they all marched out of the box into the larger pen if I would ever be able to round them all up again if it didn't work out.  That turned out to be a non-issue.  I finally summonded up my courage and cut a pop door into the side of the box this morning and held my breath. 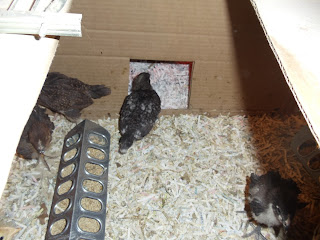 Sure enough they all just looked at the door and then turned their backs on it.  It took several minutes before any of them mustered the courage to go through it and then those that did began to peep...loudly...and quickly found their way back into the box.  As I said, chickens are definitely not adventurers.  It has been about three hours since I cut the pop door and I have only seen 2 or 3 birds out there.  It could be bacause it is colder out there and not so pleasant for them.  I did put one light out there to help with warmth but the heat is not trapped like in the box. 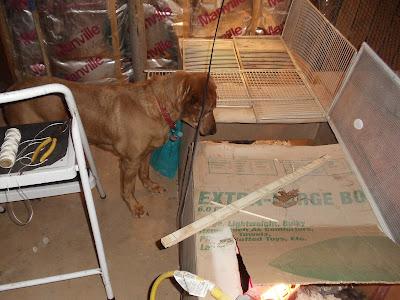 Two creatures that a definitely enjoying the chicks are Thelma and Louise.  When the box was up on a high table in the kitchen the dogs were largely indifferent to it.  Now that it is on the basement floor and they can look down inside they are fascinated.  I don't trust them in there alone for long but thus far they have not made a  move on the chicks....Just watchful watching.  Here Louise is checking on the reactions to the new door. 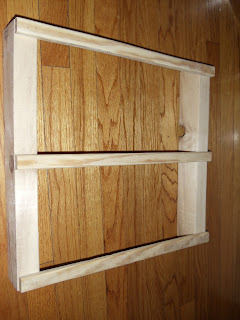 It is also time to introduce roosting bars.  Chickens sleep on roosting bars rather than on the ground.  When chickens were wild they used to sleep in trees.  Keeps them safer from predators.  When I was in Argentina last December working on a small organic family farm with Liz, the farmer had a small evergreen tree in the middle of the chicken yard and during the day as many as 15 chickens could be counted sitting up in its branches...hiding from the sun and the barking dogs.

So this morning I built a set of mini roosting bars for the little ones to practice on.  The important part was to round the edges of the bars (file and then sandpaper) so the edges are not too sharp on their feet.  This is not big enough for everyone but I figured to make one and learn from my mistakes to build the rest.  So far no one is sleeping on it...they see it more like a playground jungle gym! 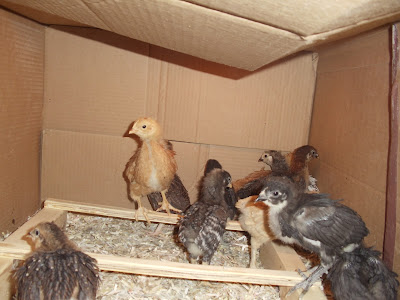 Notice the sag in the roof of the box...may be nearing the end of its useful life... 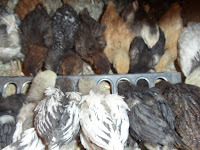 This morning when I filled the feeders the birds went crazy.  Apparently last night they ate up almost every bit of feed in both of them.  This morning they were full of shredded paper and droppings and not much else.  I am getting near the bottom of the first 50 lb sack of chick feed.  This is pretty much what Jen had advised me to expect.  Tomorrow I think I will head back to Riverhead to the feed store to pick up a larger size waterer (3 or 5 gallon), a larger feeder that will ultimately hang from the ceiling of the finished coop, and another 50lbs of feed.  I guess its time to start keeping track of costs so we will know how much these eggs really cost.   But for now...the experience has been well worth the cost.

Cobwebs made of chicken dust forming on the ceiling above the box...shhhhh...don't tell Steve. 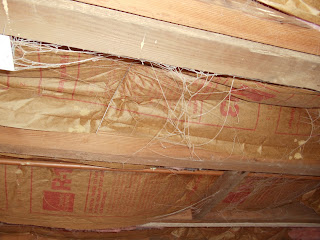