Spring Has Finally Arrived and Things Are Getting Busy

Taxes are just the least of what has to get done this week.  To all my kids, don't worry...it's all under control!  The weather has really improved this week and a lot is happening both at our house and at the farm.  We had two coop building days this week...Wed and Thurs.  I have thrown myself at the mercy of the Habitat coup builders, imploring them to finish the coop before the smells emanating from the basement push Steve to the breaking point.  He is amazingly patient but when he finally hits his limit it is sudden and explosive...so I am anxious to reward his kindness thus far with a move outdoors before we get to the breaking point.

So the crew came through, working two days, thursday until after 5:00, something that I have rarely seen.  I nearly had to cook a third meal that day. 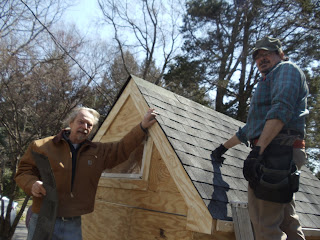 Wednesday the roof got shingled.  The only issue I have with the roof is that the nails are all sticking through on the inside.  I am worried about putting one through my own head but I am also worried about flying birds.  Tom has suggested rigid 1/2' foil coated insulation boards to line the roof and cover the nails but I am reluctant.  The advantage is that they will keep the coop warmer in winter and cooler in summer but the down side is that every added surface is another place for mites, or molds, or other disease-producing thing to find a home.  Still have not decided what to do. 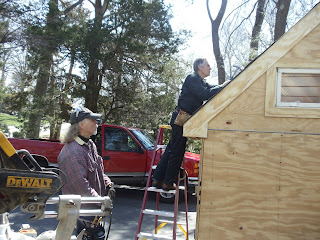 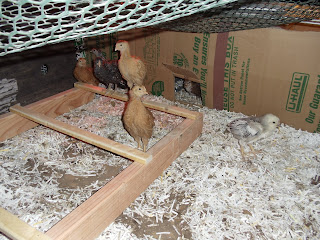 We also made a second set of small roosting bars for the chicks to practice on in the play yard.  With a new feeder, a waterer and lots of chick weed thrown in the chicks are enjoying the play area and spending lots less time in the saggy, smelly box.

On Thursday Tom came and within a few short minutes, and with the help of a compressor and a nail gun, built a beautiful set of 6 nest boxes.  I was in awe...so fast, so well designed.  Later after he left we installed them in the coop, a foot off the ground so some birds can nest under them on the floor if they wish.  They look and fit great. 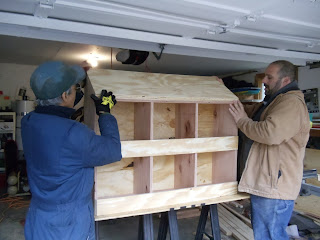 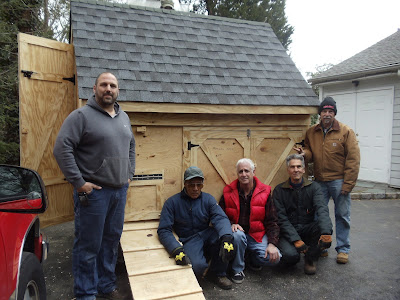 They also installed the hinged drop down soffits on the side of the house.  I need to make yet another trip to the Home Depot to buy more slide bolts so they can be sealed shut at night or when it is cold.

Slide bolts were also installed on the front door (2), the chicken door, and the cleanout door.  No more predators are going to be bothering these chicks when they are in the coop.

So the coop is looking really sharp.  We decided to take a group photo of the crew and coop.  Pictured from left to right are Tom, Ed, Mike, Ray and Larry.  The top of Chris's hat is just visible above the roof.  He is more than a bit camera shy though I have managed to catch him at work in several of the photos included in the blog.  Missing that day was Charlie.

And in case anyone wants to see the house without the guys blocking all the detailed trim work ...  I think it's beautiful. 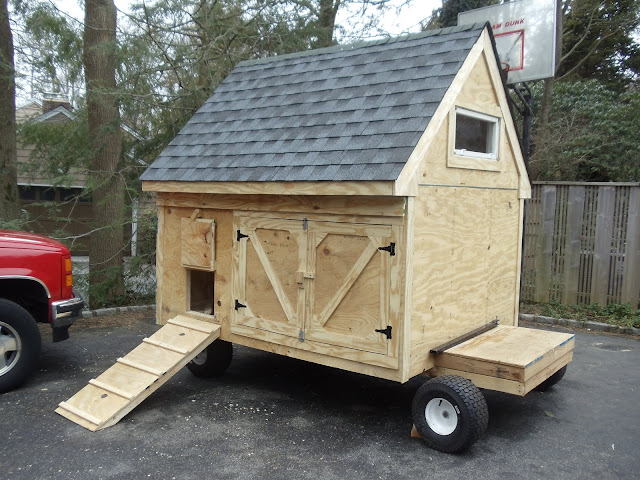 Before leaving late Thursday the guys mounted the rails that will hold the roosting bars.  They are angled so that the bars will be 18" apart , the lowest one about 18" off the floor and the highest close to 4'.  The birds like to roost as high as possible so the competition for the highest rail will hopefully get everyone in and settled before nightfall.  I expect I am going to be walking out of the farm by moonlight many nights this summer.

They left me with the job (and the jigsaw) of cutting u-shaped supports to hold the rails.  The idea is that they will be removable to either clean or ultimately replace.  Sort of the way closet poles are supported.  Of course I have not yet found the time to get this done.  The birds don't need them to move into the house so i'm ok for a while.  I also need to buy stain and treat the outside of the house so the wood doesn't rot.  And Chris wants the window trim painted white.

Friday was back to farming.  I spent the morning and early afternoon (about 4 hours) planting spinach seeds for Restoration Farm.  Caroline had baby Kobi last week and I am trying to help by doing some of the greenhouse work.  I prepared 14 flats of spinach, one seed carefully placed in each cell.  I have got to get an ipod or something to listen to for those kinds of jobs.  In the afternoon I went to Ralph and Susan's  to visit them and their garden and see if I could pick up my seedlings that have been growing in their greenhouse.  But no one was home so I left and went back instead on Saturday afternoon.

Saturday at the farm was busy.  On Thurs while I was coop building Dan, Trish and Lesley they were planting the kale, swiss chard, onions and leeks.  On Saturday we had a lot of volunteers, and much better weather, and we planted beets, red and yellow, and lettuce, green and red leaf.  The weather was beautiful, warm and sunny, and everyone was so happy to be out in the fields there was little mention of aching knees. 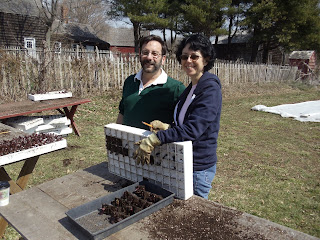 I snapped a few photos

Wayne and Terry- now experts at popping out starts 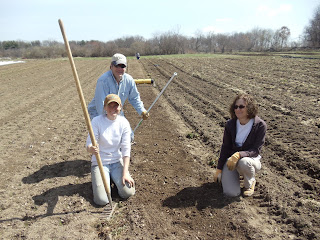 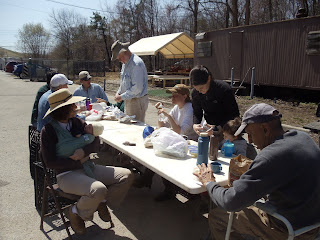 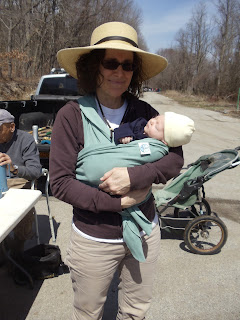 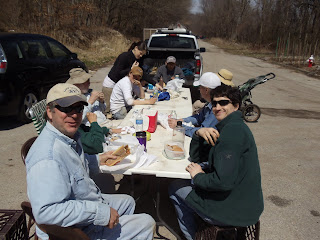 .lunch at the farm...every week the table gets longer...you should come join us and see

For those dedicated friends who have managed to get this far, I asked my son Evan about the problem with posting comments.  Apparently you need to push preview after you write your comment and then type in the scribbled word they give you ...this is to prevent programmed posting of ads or other noxious things on blogs.

I hope that solves the problem.  Thanks for reading...enjoy tomorrow...it is supposed to be in the 70's and sunny.
Posted by Donna's Chickens at 6:06 PM